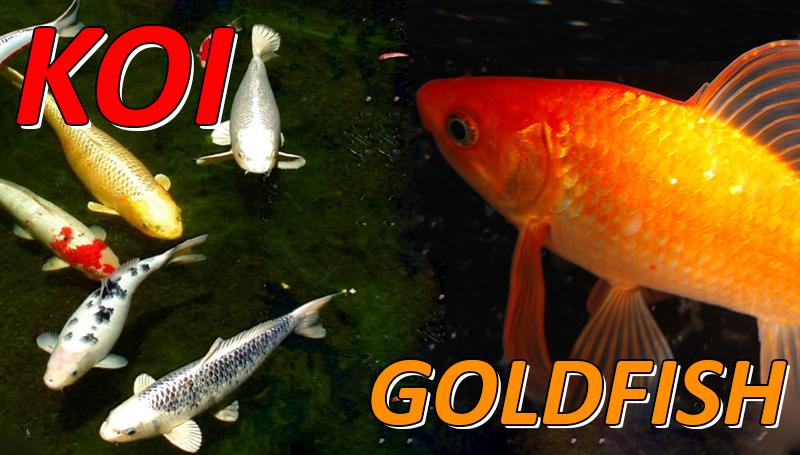 When you look at goldfish and koi, it’s pretty obvious to see that they are related species. Why? Well, because they look too alike for them not to share a common ancestor.

While the question is easily answered, there’s more to their relationship than just genetics. So, in this article we’ll look at their connection from all angles.

What Is A “Species” Anyway?

Biologists study life; they examine it and classify it. Classifying an organism means, first, establishing that it is a distinct species. This means that it is a “type” of animal different to other “types” of animal. Ways of defining a species differ, but one common definition for vertebrates depends on the ability to sexually reproduce and for the offspring of that reproduction to be fertile.

For example, if you cross a horse with a donkey you get a mule. But, often, the mule is infertile. However, this is not a hard and fast rule. Sometimes animals we’ve labeled as different species are closely related enough that they are able to produce fertile offspring!

So, as you can see, in its complexity, nature defies our attempts to classify it!

How does the above influence our understanding of the relationship between koi and goldfish? Well, first and foremost, they are definitely different species. Koi have barbels, goldfish don’t. Also, koi grow much bigger than goldfish. And finally, koi and goldfish have similar but different body shapes.

But, for all their differences, we can see a similarity in them!

What does that similarity mean? Well, it simply means they share a common ancestor.

So Just How Closely Related Are Goldfish And Koi?

To see how closely related koi and goldfish are, let’s look at their scientific designations.

So, we can see that goldfish and koi are closely related because they are from the same family, i.e. “Cyprinidae”.

But, let’s start from the beginning. So, the kingdom is Animalia, which is animal life, as opposite to Plantae for plants.

Next we have the phylum, which is “Chordata”. This phylum contains the vertebrates, i.e. fish, reptiles, amphibians, birds, and us, the mammals. So, obviously both koi and goldfish—as fish—are related at that level.

Class comes next! And as we move down the classification categories we get a closer relationship. Both koi and goldfish are categorized as Actinopterygii. This means that they are ray-finned fish. Ray-finned fish have spine-like features to their fins, and then between those rays is thin skin. We define ray-finned fish in opposition to lobe-finned fish, such as lung fish.

From there, we go to family, which means a closer relationship again. Also, it’s the last and closest category koi and goldfish share. Koi and goldfish are part of the Cyprinidae family, so there we refer to them as “cyprinids”.

While being in the same family of species indicates a very close relationship, there is one even closer: genus. However, koi and goldfish belong to different genera (the plural for genus). Koi are in the “Cyprinus” genus, while goldfish belong to the genus “Carassius”.

While, common names like “carp” lack scientific accuracy, they can still be useful as a starting point for our understanding. Problems arise with common names applied by the layperson when they are definite misnomers. For example, in the fishkeeping hobby there are lots of fish with “shark” in their common name. Bala sharks, black sharks, and rainbow sharks jump to mind. However, none of those fish are true sharks! And therein lies the problem with common names.

Having said that, when it comes to the common use term “carp”, it isn’t nearly as inaccurate. This is because, at the very least, all fish commonly known as types of carp are cyprinids. However, they are often from different genera.

Can Scientists Be Wrong?

Biologists, like all scientists, are in search of the truth. So, naturally, they will examine and refine understanding through never-ending research and vital peer review.

Sometimes new research—DNA research especially—allows biologists to better understand an animal and its relationship to other animals. Therefore, quite often, fish are moved around within the categories. Usually it’s just a genus move.

So, it’s important to remember that our understanding of different types of fish and their relationship to each other is only our best understanding at the current time. In the future, where they stand can all change—and that’s a good thing! Because we should always be seeking the truth.

Are There Wild Koi And Wild Goldfish?

Whether there are wild koi and/or wild goldfish is a more interesting question than it might first seem. This is because, depending on how you look at it, the answer is yes and no.

First of all, let’s establish a definite truth: both goldfish and koi are not “natural”. They are fish created by humans via selective breeding for variation and mutation. Put quickly, farmers discovered that sometimes some fish in their ponds were born more colorful than others. The farmers then separate those fish and kept them as pets. Subsequently, they began to breed colorful fish with each other to produce more colorful fish. Additionally, they worked with the bloodlines to produce increasingly colorful fish.

So, you might think that answers the question. But, it doesn’t. This is because there are lots of feral populations of both koi and goldfish. Freshwater fishers are often pulling beautiful koi and shimmering koi from bodies of water all over the world. This is because, sadly, hobbyists sometimes release their fish into the wild when they can no longer care for them. Also, sometimes flooding causes fish from ornamental fish farms to escape into other bodies of water.

Another Angle On “Wild” Koi And Goldfish

There is another aspect to the question, because the wild ancestors of koi and goldfish could be considered to be wild versions of their domestic counterparts. In which case, the answer to the question of “are there wild koi/goldfish?” is yes, most certainly.

Hold your horses, though. Because, who exactly those wild counterparts are is up for debate.

For example, scientists are unsure whether goldfish were bred from Carassius carassius or Carassius Gibelio.

Also, koi suffer from a similarly confusing origin story. This is because the common carp was once thought to be a single species across Europe and Asia. There was a distinction made between the common carp and a variation known as the Amur carp which was designated as a subspecies.

More recently, consensus has changed. The Amur carp is now considered a distinct species. This means we have the common carp, C. carpio, and the Amur carp, C. rubrofuscus hailing from the Cyprinus genus.

One final point on this topic: koi are considered by biologists to be the same species as their closest wild counterparts, i.e. C. rubrofuscus. Whereas, goldfish have been domesticated so long and are so far removed from their wild Carassius genus members that they are considered a distinct species.

This has happened with other domesticated animals, like sheep and cows.

What Other Cyprinids Are Common In The Aquarium Hobby?

Lucky for us, the aquarium hobby is absolutely filled with awesome cyprinids, not just goldfish and koi.

So, if you have a smaller community aquarium and you’re looking for fish that are related to koi and goldfish then maybe you could consider some of their cousins.

Here’s a list of smaller common cyprinids in the aquarium hobby:

There are also some other very large cyprinids that pop up in the hobby that are better kept in ponds or extremely large aquariums:

Hungry? Try Some Goldfish! Have A Bite Of Koi!

Koi and goldfish domestication is related, too! This is because both members of the Carassius genus and the Cyprinus genus (i.e. eventually goldfish and koi respectively) were domesticated first and foremost as food fish.

How Goldfish & Koi Went From Food Fish To Pet Fish

It was from these captivate stocks that variations in color were noticed by their owners. Those slightly colorful fish were separated and kept as pets. From there, breeders began to concentrate on refining the color and breeding for new colors. Generations later wild carp species had become pet goldfish and pet koi, with all that beautiful coloration to boot.

Can Goldfish And Koi Breed Together?

Now this question is a head scratcher because information is a spotty. But, if you Google the topic you’ll find a lot of reports of koi/goldfish hybrids. Also, there are examples of common carp/goldfish hybrids.

Furthermore, an academic study of genetics by Yude Wang et. al investigates the idea that, in fact, goldfish originated via a distant hybridization between blunt snout bream and a Cyprinus spcies. Academic publications aren’t always an easy read for the layperson, but here’s a link to check it out if you’d like.

Can Goldfish And Koi Be Kept Together?

Yes, definitely. They’re equally tolerant of a wide range of water parameters, e.g. pH and hardness. Furthermore, they tolerant a similar range of temperatures. And lastly, they’re both very peaceful fish and won’t bother each other. Well, unless a fish is small enough to fit in another’s mouth. This is because almost all fish will eat another if it fits in its mouth.

Selective breeding has honed in on and developed various mutations in both koi and goldfish. But, the same mutations haven’t arisen in both fish.

Whereas, koi come in a scaleless or mirror scaled variety known as doitsu. You can read more about doitsu koi here. Both koi and goldfish can come with a long-finned mutation.

When it comes to color, the way koi and goldfish differ is very interesting. Black in goldfish is difficult to maintain—specifically, over time black tends to fade away to reveal orange underneath. Whereas, in koi, black can come forward and intensify as the fish ages. Goldfish have calico color variation

Who Live Longer, Koi Or Goldfish?

The lifespan of a goldfish varies. Naturally, the conditions the fish is kept in impact its longevity. But, a well-kept can be expected to live between 10 and 15 years. However, fancy goldfish (i.e. those with twin tails and egg-shaped bodies) usually have much shorter lifespans—they often don’t make it to 10 years old. Interestingly, the oldest goldfish on record was 43 years old.

Again, a koi’s lifespan will vary depending on the quality of the water it is kept in as well as the quality of the diet it is fed. But, generally speaking, koi live between 25 and 35 years. However, they are capable of astonishing longevity! A koi named “Hanako” lived to be 226 years old!

Goldfish And Koi, Which Grow Bigger?

Koi grow bigger, there’s no doubt about that. However, just like lifespan, quality of care influences the ultimate size of a fish. So, a poorly cared for koi might only reach 15 inches (~38cm). Whereas, a well cared for koi regularly reach between 22 inches (~56cm) and 36 inches (~91cm). But, beware! Because koi can grow even larger. A famous koi named “Big Girl” reached 4’1” (~125cm)!

Goldfish, on the other hand, are generally around 10 (~25cm) inches when fully grown. They can quite often reach 12-14 inches (~30cm-36cm)! But, the usual caveats apply: poor food and water will limit their growth. As a result, sometimes goldfish never grow larger than 6 inches.