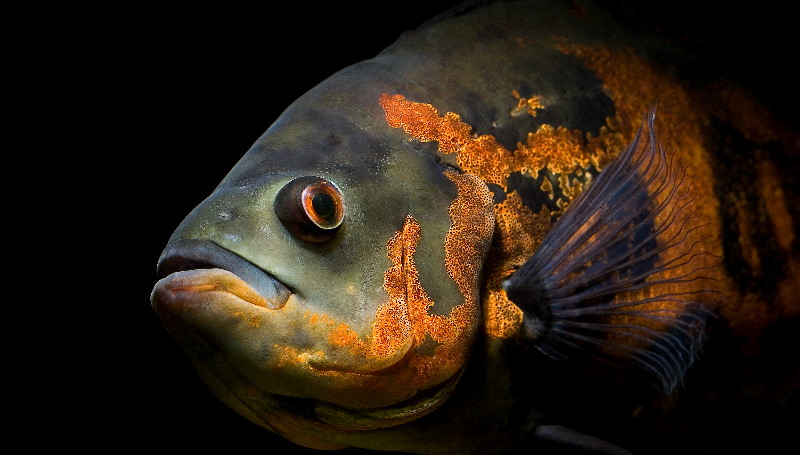 In this article we’re going to look at all the different varieties of oscar fish currently available in the aquarium hobby.

Whenever a fish is domesticated there is the chance for new varieties to be developed. When a fish is bred in captivity, the breeder has the opportunity to curate the clutch of eggs. Typically, breeders look to cull mutated or unhealthy fish. But, selection doesn’t end on just health. Naturally, humans also value aesthetics. After all, isn’t that why we keep pet fish? If they’re not beautiful, then they are at least interesting to observe for another reason. Regardless, how a fish looks matters!

So, imagine a clutch of baby fish. Among that group, a few individuals have slightly different colors. Naturally, breeders separate the unusual individuals for further breeding. This is how selective breeding happens. Thanks to selective breeding, we have better fruit and vegetables, a wide variety of dog breeds, and all kinds of useful farm animals from draft horses to dairy cows!

Some fish have more varieties than others. For example, goldfish and koi come in a wide range of colors (and for the former, body shapes). This is a result of earlier domestication as compared to other species. So, over the years, more mutations have arisen and consequently been bred for.

Oscar cichlids are hardy and interactive fish, which has made them ideal pet fish. In fact, they’re known as “wet pets”. This is because they provide a more “pet-like” experience than most other fish in the hobby.

As such, over the decades, breeders have found different mutations present in their oscar cichlid fry.

The standard wild type oscar is a darkish brown with orange marbling across the body. Selective breeding has increased the amount of orange on the body. Therefore, these fish with more orange are sometimes known as “tiger” oscars or “red tiger” oscars. However, they remain quite similar to their wild origins.

One of the earliest varieties of oscar developed in the hobby was the “white” version. Instead of the brown base, this fish has an off-white base with orange markings on top. While this fish is often labeled as “albino” the truth isn’t so clear. Perhaps “leucistic” is a better term for this white variant. To learn more about the correct nomenclature for this fish check out our article discussing it here.

The “longfin” oscar is just what it seems, a version of an oscar with elongated fins. Think of a comet goldfish, and then imagine a similar mutation on an oscar. This variety can also come in the different color variants, too. As such, you can buy a longfinned white oscar or a longfinned brown oscar!

Short body mutations can be quite controversial. A short body mutation in a fish happens when it is born without the correct number of vertebrae in its spine. Consequently, the back is arched and the body is shortened. Unfortunately, this mutation packs all of the fish’s organs into a smaller abdominal cavity. As a result, short bodied fish generally (but not always) experience shorter lifespans among other health issues.

While this variety has its health-related drawbacks, the shortened body creates a “cute” aesthetic which, understandably, has its own loyal following.

When I think of oscar coloration, I think of the two base types. By that I mean, the wild brown-type base and the domestic white strain. But, some oscar keepers divide the color types even further.

For example, white oscars with red covering most of their body are known as “chili red” oscars.

Additionally, there is a “lemon” oscar variety which possesses a more yellowy look than orange or red.

Best Food For Your Oscar?

Fluval Bug Bites are one of my favorite foods to feed my oscars. This is because in the wild oscars prey on invertebrates, both fully aquatic and those bugs that land on the surface of the water. And Fluval’s excellent bug bites are made from soldier fly larvae! This means it’s an excellent food for your oscar.