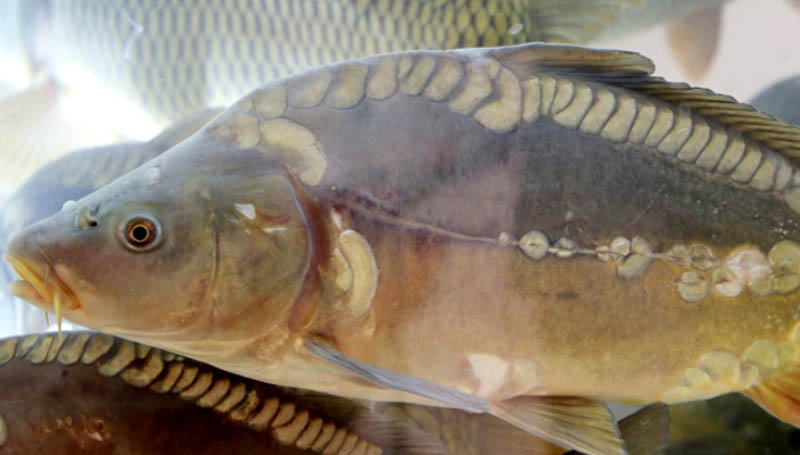 “Doitsu” koi are a variation of koi that have no scales or very few scales. And if they do have any scales, because of the mutation, they tend to be over-sized and positioned along the fish’s lateral line and across the back of the fish. Also, sometimes the over-sized scales cover more of the body, in this case they’re known as “armor scales” as they resemble metal plating.

You’ll notice I call them a “variation” rather than a “variety”. Because, the scale type can be applied to just about any of the established koi varieties. Imagine your favorites—kohaku, shiro utsuri, showa—and then just know that if you see them without scales then they are:

There are some, of course, some exceptions to that naming convention, but I’ll get into that further in the article as it pertains to the history of doitsu koi.

Koi History And The Meaning Of Doitsu

Before I get into the meaning of the word doitsu in relation to koi, it’s best to lay down a solid foundation of knowledge about koi history.

Koi are a form of domesticated carp, bred specifically for their bright colored mutations. For many years, it was believed that koi were bred from an East Asian sub species of domesticated common carp (Cyprinus carpio). But, DNA testing has revealed that the fish koi were bred from is a full species in its own right, the Amur carp (Cyprinus rubrofuscus).

That’s right, they are! However, the first record of Amur carp being bred for color comes out of China during the Tang Dynasty (which lasted from the 7th to the 10th Centuries).

But, the koi we admire today have, relatively speaking, a much more modern origin.

Koi as we know them were first bred in Niigata, Japan in the 1820s. It wasn’t until 1914 that the outside world became aware of them due to the 1914 Taisho Expo in Tokyo.

So What Is The Meaning Of Doitsu In The Context Of Koi History?

Simply put, doitsu means German in Japanese. It comes from the German language’s own word for German “Deutsche”. So when you bring the word “Deutsche” into Japanese you get… Doitsu!

What Have The Germans Got To Do With Koi?!

The Germans domesticated carp in exactly the same way that the Chinese and Japanese domesticated them: for food. Although, Europeans would have domesticated C. carpio and East Asians C. rubrofuscus.

So The Germans Were Breeding Colorful Carp Too? Not Exactly…

While parallels exist between Asian and European domestication of carp species, the Germans did not selectively breed for bright color mutations.

Instead, Germans were breeding for ease of eating! The scaleless mutation cropped up in their domestic carp stock. Therefore, German fish farmers realized that a scaleless fish did not require descaling, and as such, would be easier to prepare and eat.

And so, German/Deutsche/Doitsu carp were born!

Okay, So Germany Had Dull But Scaleless Fish! When Did They Reach Japan?

Scaleless common carp were brought to Japan as food fish in the early 20th Century. In 1912, Kichigoro Akiyama, a teacher at the Tokyo Fisheries College, took that monumental step and crossed German scaleless carp with Japanese colored carp!

What Was The First Variety Of Doitsu Koi?

You might be wondering what variety he decided to use.

Kichigoro Akiyama used asagi and in doing so created shusui! So, shusui was the first doitsu variety of nishikigoi (Japanese for koi). This strikes me as such a poetic choice. But, when you hear what “shusui” means you’ll understand the full poetry enshrined in the variety and its name.

And shusui is, of course, an example of one of the exceptions to the naming convention I mentioned in the introduction to this piece.

Following that, koi breeders have created doitsu versions of just about every variety of koi!