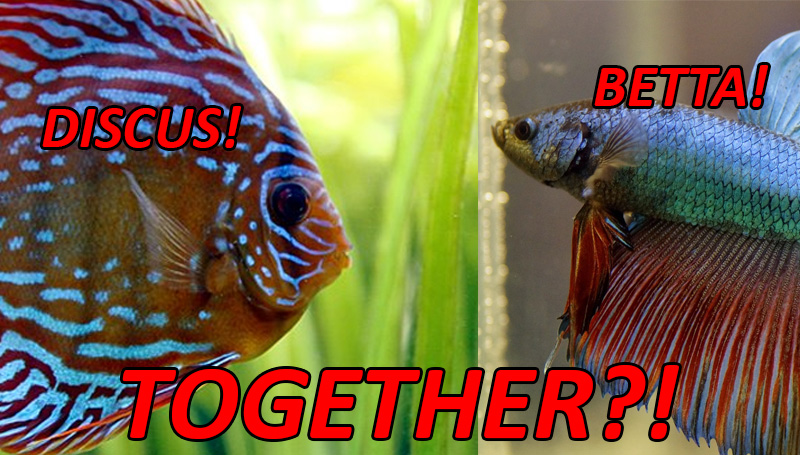 Size Difference Between Betta And Discus

Size difference between fish in a community aquarium isn’t inherently a problem, but it typically can be a problem. That is because most fish, even some thought of herbivorous, will opportunistically devour any other fish that will fit in their mouth.

So, would an adult discus be able to eat a betta fish? Probably not, because an adult betta—while significantly smaller—is ultimately too big to fit into a discus cichlid’s mouth.

However, that isn’t the end of it; because we have to bear in mind that large fish can, understandably, intimidate smaller fish. Therefore, your betta might not be as outgoing while in the company of adult discus.

Discus are schooling fish, which is somewhat unusual for cichlids. Most cichlid species form breeding pairs while others might operate “harems” i.e. one male with a larger territory containing females with smaller territories within his super territory. But, discus aren’t like that! They behave in a similar way to angelfish. They feel comfortable in groups, but will pair off to breed.

In order to keep your discus happy and stress free it would be best to keep them in a group of six or more. This also reduces aggression, which will be a bonus if you are trying to keep a betta fish with your discus.

Additionally, because discus are best kept in schools, you will need a much larger aquarium than the average betta fish aquarium. So bear that in mind while considering mixing discus with your betta fish.

A Taller Aquarium Will Help!

Furthermore regarding tank size: a taller tank will help significantly! Taller aquariums are useful when keeping betta fish with discus because it will allow the fish to better avoid each other in the water column.c Furthermore, because discus possess tall, thin bodies, they feel more comfortable in deeper water.

Discus are steadfast mid-water fish, and will only really stray from that mid-water range at feeding time when they may come to the surface for floating food. However, they typically prefer slow sinking food so that they are able to feed at their natural, mid-level water range.

When it comes to feeding time, you’re in luck because the nutritional needs of discus and betta fish are not entirely disparate. In fact, they are actually quite similar. This is because invertebrates form the core of both fish’s diet in the wild. The only difference is the size of the invertebrates they eat!

Simply put, both your discus and your betta fish will be able to live a happy, healthy life consuming a quality commercially produced food. However, you may want to purchase a floating variety of food for your betta (who likes to feed from the surface). While, alternatively, discus will prefer a slowly sinking food that they can consume mid-water.

In the aquarium hobby, stated water chemistry needs are almost always very misleading. This is because domestication reduces sensitivity to imperfection pH and hardness values. Wild caught fish, however, can be extremely finicky and it is sometimes advisable to attempt to replicate the water chemistry from where the fish was collected.

Therefore, unless you’re keeping wild bettas or wild discus, then you don’t really need to worry about pH or hardness too much. Longstanding domesticated strains of both discus and betta fish are tolerant of all but the most extreme tap water.

Admittedly, discus do better in higher temperatures, there’s no doubt about that. Some keepers push their discus temperatures into the 90°F (32.2°C) range. Whereas, betta fish can do better at slightly lower temps. This, though, isn’t a big problem because there’s a nice chunk of crossover between the two different species when it comes to temperature range. Personally, if I was going to keep discus and betta fish together, then I’d aim for a tank at around 82°F (27.7°C).

Discus Are Cichlids, So They Can Have Complex Personalities

Discus, like angelfish, are among the less mercurial members of their family. However, they are still cichlids. So, even the most docile, even-tempered and “community friendly” cichlids are prone to the odd bout of aggression.

What makes keeping cichlids more challenging still is that they tend to have strong, individual personalities, i.e. one discus might be a chilled out dude, whereas another discus might be a total butthole! This means that dedicated observation is required whenever you mix cichlids with other fish, you’ll need to watch them to see how their behavior unfolds in the early days. Although, with time you’ll be able to relax as you get to know the personalities of each particular fish.

What If Your Discus Breed?

This can be a problem for any tank mates, not just betta fish. If cichlids breed, and discus are no exception, their aggression increases. At first, when eggs are laid, the aggression is focused around the eggs. It worsens once the fry hatch and the parents move around the tank with the fry displaying aggression towards other fish.

In my opinion, if you see a pair of your discus showing signs of having paired off then it might be a good idea to separate them and take a crack at raising up the fry! Discus are fascinating fish when it comes to breeding, because the fry eat a slimy secretion from the parents skin. Furthermore, discus can be quite expensive so if you raise up good quality discus then you can recover some of your hobby money by selling them.

Be Safe, Get A Short-Finned Betta

When it comes to fin nipping, discus are not like tiger barbs, nor are they like some of the more nippy tetras (black skirts, serpaes, et al). However, I’m in the “why risk it camp”. That means that I’d recommend a plakat betta if you wanted to keep it with discus. The pluses of removing the temptation of flowing fins cannot be overlooked.

Aquascaping For Discus And Betta Fish

Discus and betta fish are not from the same part of the world, they hail from South America and South East Asia respectively. However, that doesn’t mean that you can’t create a beautiful and suitable environment for them to share.

Neither of these species object to being kept in a planted aquarium. Furthermore, both discus and betta fish will leave delicate plants alone for the most part, thereby allowing them to flourish.

However, it’s worth noting that a planted environment is not “natural” for a discus as they tend to come from dark river banks where the overhanging trees prevent light from reaching the water, which in turn prevents the growth of aquatic plants. Regardless, discus don’t suffer in a planted tank just because it isn’t “natural” for them.

In fact, you can meet the needs of both fish by using floating plants! All you betta keepers out there know just exactly how much betta fish love and need that surface cover. After all, it is among that surface cover that the male will build his bubble nest. Why do the discus like it? Well, in their wild environment they’re used to overhanging terrestrial vegetation providing security⁠—you can emulate this with floating plants!

Other Tank Mates To Complete The Setup

If you’re going for an active and interesting community aquarium with some atypical tank mates then consider this list of other fish to complete the setup.

Brisltenoses display lots of interesting behavior and will breed readily even in a crowded community aquarium. Furthermore, there are several color forms available: standard, super red (more of an orange), albino, lemon drop, blue eyed, and green dragon. So, you’ve got lots of choices. Lastly, they are very hardy and tolerant fish. This means that they’ll do well with whatever setup you choose for your focal fish (be it your betta, your discus, or both).

Corydoras are a community aquarium staple! There are so many different species, each displaying a unique pattern and color. Importantly, they stay very small so won’t outgrow your tank. Also, they are school so they display fun and engaging behavior.

Neons are great, aren’t they? Bright blue and bright red, what a combination! In addition to that, they’re totally peaceful. Unlike other tetras, they don’t even nip fins. It’s as though nature created the perfect community fish. They’ll do well with your discus and your betta fish. The only drawback will be that your discus might grow big enough to eat your neons. So, therefore, you might want to consider cardinal tetras as an alternative to neons. Cardinals look similar, but have a little more red and grow noticeably larger.

Conclusion: Keeping Discus With Betta Fish: Is It Worth The Hassle?

While I’ve spent the bulk of this article explaining how I would try to successfully keep betta fish with discus, that doesn’t necessarily mean I think it’s, generally speaking, a good idea.

Perhaps the experienced aquarist could try the combination, especially if they have extra tanks setup to move the fish around if it doesn’t work out.

But, when it comes down to it, a betta fish can thrive in a five gallon aquarium. Whereas, a school of discus are usually at home in 55+ gallon setup. So, logic dictates it might just be more sensible⁠—if you love both discus and bettas⁠—to keep them separately. A five gallon tank for your betta won’t break the bank!