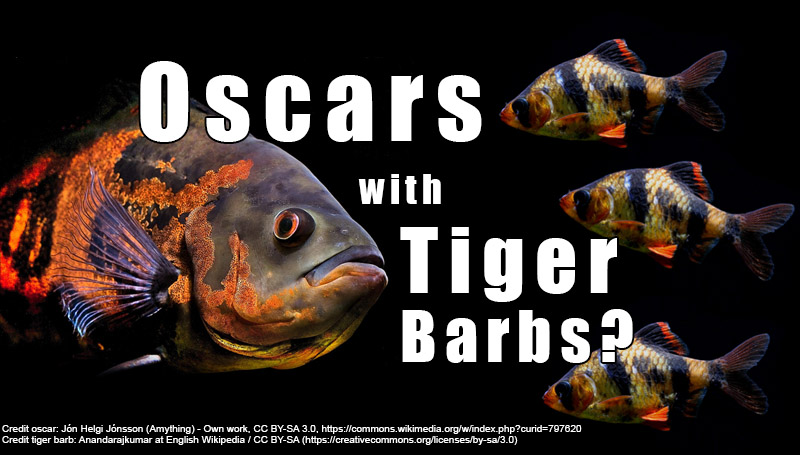 Oscars with tiger barbs, it might seem like a bad idea. And, in most cases, it is. But, if you were in a pinch and the situation was just right, maybe you could keep oscars and tiger barbs together (for a very short period of time)!

Oscars Get Too Big To Be Housed With Tiger Barbs

Let’s make this clear right from the get go: oscars and tiger barbs are not good tank mates. The primary reason for this is that oscars grow far too big to be houses with tiger barbs. Furthermore, oscars are predators. And yes, in the wild they tend to prey more on invertebrates than they do other fish, but given the chance they will eat a fish that fits in their mouth.

Tiger barbs will fit in an oscar’s mouth. So, oscars will eat tiger barbs. Also worth considering is the fact that oscars will eat fish that barely fit in their mouths. Which can be a problem for both predator and prey. For example, if an oscar eats a relatively large fish tail first then the victim may become lodged in the oscar’s mouth. If this happens both the tiger barb and the oscar could die.

But, For A Short Time You Could Keep A Baby Oscar With Tiger Barbs

We’ve clarified that keeping oscars and tiger barbs together is, generally, a no go. However, for a short while, you might be able to keep an oscar with some tiger barbs. While the oscar fish is very, very young and its mouth is very, very small it might be possible to successfully keep the oscar with tiger barbs. But, bear in mind, oscars are notoriously fast growers and it won’t be long until your oscar is big enough to start snacking on your tiger barbs.

A lot is made of pH and hardness, but when it comes to fish like oscars and tiger barbs, it isn’t too important. This is because both of these fish are longstanding favorites in the aquarium hobby. Therefore, over the years, generations of captive bred fish have become more and more tolerant of a wider range of water parameters.

So, this means that both oscars and tiger barbs are likely to be fine in your tap water.

In the wild, tiger barbs are true omnivores. They will eat invertebrates as well as plant matter. Oscars, too, are omnivores. The diet is predominantly invertebrates while they are also known to eat fruit that might land and float on the surface of the river. Regardless, both of these fish are happy and healthy when fed a quality commercial food.

Getting into specifics, Fluval’s Bug Bites (affiliate link) will satisfy their shared need for invertebrate nutrition. Whereas, a more general food like Tetra’s Color Granules (affiliate link) can meet the rest of their dietary needs. Both oscars and tiger barbs will appreciate the occasional frozen food such as blood worms.

Tiger barbs are attractive fish, the yellow/orange coloration contrasted by the dark bars makes them interesting to look at. There’s no denying that. But, the size difference between an adult oscar and tiger barbs makes them bad tank mates. So, let’s consider some alternatives:

The fish on this list are schooling fish, like tiger barbs, but they grow much bigger than tiger barbs. In fact, they grow big enough so that an oscar would not be able to prey on them. However, unlike tiger barbs, all these fish are silver. So, at first, you might think that kind of coloration in a fish is boring. But, consider this: if your oscar is your aquarium’s centerpiece, then a school of silver fish sharing the tank with your oscar can active as living accents to highlight your oscar’s beautiful coloration.

Oscars and tiger barbs do not make good tank mates. While temperature, water chemistry and diet are a match, size is not. And that size difference is critical. Your oscar will eventually eat your tiger barbs if you try to house them together. As such, keeping them together is not recommended.