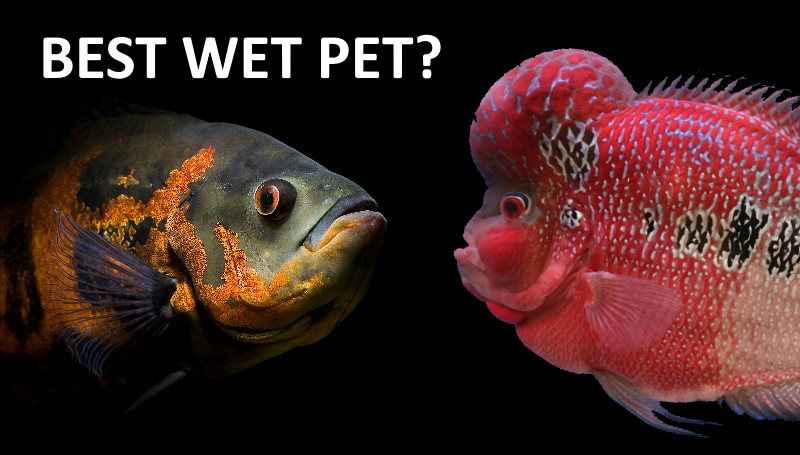 Oscar vs flowerhorn! Which is the best wet pet? It’s tough to say, so I thought I’d run through the pros and cons of each. If you’ve been struggling to decide between them, well, hopefully by the end of this article you will have made your mind up!

What Is A “Wet Pet” Anyway?

You might have heard this piece of advice before from other fishkeepers – “You should an oscar! They’re great wet pets!”

Yep, oscars are great wet pets. But, what is a wet pet anyway? Well, let’s start by thinking of the quintessential human pet, the dog (sorry cat lovers). I think of dogs because they are interactive, personable, some of them are friendly, some aren’t so friendly. In short, every dog is unique. So, when when talk about “wet pets” for our aquariums, we’re often saying we want a fish that’s more like a dog.

Oscars are definitely that! But, so are a lot of other popular fish. The other potential wet pet I’m going to compared to the oscar is the impressive, imposing, opinion-splitting… FLOWERHORN!

Which Looks Cooler, An Oscar Or A Flowerhorn?

That is a matter of opinion.

There’s no way I can tell you what to think. But, I can and will give you a break down about what I like about the appearance of both of these fish.

Oscar vs Flowerhorn: Which Has The Better Body Shape?

Oscars have these awesome upturned mouths. For that reason, they remind me of a real tough guy—they almost look like a person giving you the stink face. Whereas, a flowerhorn’s mouth is more neutral and only sometimes has a slight upturn. Which you prefer is entirely down to you. But, having said that, I like the oscar’s mouth—I can’t lie!

A good flowerhorn has a deep body that almost resembles a rectangle. While an oscar also has a deep body, it doesn’t look rectangular at all. On the contrary, an oscar’s body is oval. For me, the flowerhorn takes it on this one. I kinda dig that deep, angular body versus the more rounded oscar. Although, I can appreciate both.

Some flowerhorns can have a pinched looking belly compared to the rest of their body. Bear in mind, this isn’t all flowerhorns—only some. In general, I think it’s more common for an oscar to grow up to have a solid set of proportions. So, if you want a fish that has a real vigorous look to it, then the oscar is the one for you.

And the nuchal hump… let’s talk about the nuchal hump or “kok” as it’s also known. There are two schools of thought in the flowerhorn world, 1. bigger is always better and 2. well proportioned is beautiful. What that means is that you can get flowerhorns that have a more natural looking nuchal hump, say like what you might find on a midas cichlid, or you can get gigantic balloon-like nuchal humps. Whereas, oscars simply do not develop nuchal humps at all. So if you like a hump, flowerhorn is the wet pet for you.

Which Has The Most Interesting Behavior, An Oscar Or A Flowerhorn?

Oscars and flowerhorns are medium to large sized, New World cichlids, so you can expect their behavior to be quite similar. They both have a lot of “spunk” which makes them good wet pets. They can both be quite angry and will readily charge at you as you walk by your aquarium.

Although, the oscar is generally the more mellow of the two. And, it can—in my experience—display a broader range of behavior. Oscars are known to “sulk” when you change their water. I’ve written an article on it here, check it out.

Some oscars are very aggressive, while others can be quite docile. So, if you’re able to raise up a chill oscars, then you might be able to give him or her some tank mates. Whereas, with a flowerhorn, it’s harder to find a tank mate tough enough. Because of their armor and sedentary nature, a big pleco is a good choice for a flowerhorn tank mate.

Oscar Or Flowerhorn, Which Is The Easiest To Feed?

In my opinion, an oscar is easier to feed than a flowerhorn.

his is because an oscar’s appearance is less dependent on what it eats. Whereas, a flowerhorn has to be fed red enhancing foods to really get the red to be as bright and bold as those you’ll see in photos online. Furthermore, if you want your flowerhorn’s nuchal hump to grow large, then you’re also going to need to feed specialized food for that.

Sure, an oscar’s orange/red coloration will also be improved by red enhancing foods, it’s not really required for your oscar cichlid to actually look like the oscars you see in pictures. On the other hand, a flowerhorn that isn’t kept by an expert and fed the correct diet can often look dull and drab.

Health Issues – Are Flowerhorns Or Oscars Easier To Keep Healthy?

If you don’t take care of your oscar, like many other South American cichlids, it will develop hole in the head disease (HITH). But, if you keep up with your water changes, you’ll pretty much guarantee your oscar’s good health. Pair this with a good diet and you’re golden. That means feed a good and varied diet (and avoid feeder fish—click here to find out why) then your oscar will be very healthy indeed.

Flowerhorns differ from oscars in a fundamental way, they are hybrids and those hybrids have been selectively bred. Granted, they are genuine masterpieces and their breeders are truly talented. However, there is a price to pay for extensive selective breeding: poor health. I’m not saying that flowerhorns are generally sick fish, what I am saying is that they can suffer from poor genetics.

Get an oscar if you want a robust healthy fish. If you want a flowerhorn, then do your research on the breeder and find out if their fish are generally healthy. A breeder’s reputation suffers if the fish they produce are sickly.

Which One Has The Longest Lifespan?

Due to the health issues mentioned in the above section, flowerhorn lifespan can be very unpredictable. According to user “Chrisplosion” on the reputable MonsterFishKeepers.com forum, they can live anywhere from 2 to 15 years! This is a direct result of the extensive hybridization and selective breeding used to create them (source).

Although, you can get more robust and longer lived flowerhorns by buying from reputable breeders. A lot of the best flowerhorn breeders are in Thailand, so you might have to work via a trans shipper—but it’ll be worth if you can find a quality flowerhorn. Make sure you ask the breeder how long his strains generally live before making a purchase (if lifespan is important to you, anyway).

Meanwhile, an oscar cichlid can be expected to live between 10 and 20 years! And because they aren’t as intensively bred, that life expectancy is quite reliable.

So, when it comes to lifespan, the oscar beats the flowerhorn hands down!

Which Is More Expensive?

How expensive is an oscar compared to the price of a flowerhorn?

So, let’s couple the shorter lifespan with the price to see how good value a quality flowerhorn is!

I went over to AquaBid.com to grab some screenshots to give you an idea of the price for quality, imported flowerhorns. As you can see in the image above, they’re usually over $100, can be as low as $50 and sometimes get up to $300. But, bear in mind, for a top quality adult flowerhorn, you’ll pay much more than $300!

Meanwhile, Petsmart and Petco are (at the time of writing) selling their oscars for around $6 for a juvenile.

But, it’s not just the initial investment. Both of these fish will require ongoing feeding and care, the price of which differs between them.

The oscar, in my experience, is a much messier eater and therefore might require more expensive filtration and more frequent water changes. While, flowerhorns—as mentioned above in the diet section—are much more expensive to feed because of their specialized diet needs. Although, oscars are not cheap fish to feed either, oscars require a good pellet like Hikari Cichlid Gold (affiliate link) combined with regular treats of frozen foods.

How Easy Is It To Get A Good Oscar Or Flowerhorn?

If you read the price comparison, you might have noticed that I sourced AquaBid.com for the price of a flowerhorn, while I was able to grab the price of an oscar from Petsmart and Petco!

That really says it all about how easy it is to get an oscar versus a flowerhorn. You’re always able to find oscars nearby. Stores like Petsmart and Petco do get flowerhorns in from time to time, but the truth is they rarely grow up to look like the awesome fish you see on Pinterest and in Facebook groups. To get a nice looking flowerhorn, you’ll usually have to work directly with a breeder. And, furthermore, the best breeders are typically in Asia, so if you live in the US like me, you’ll need to work with a trans shipper.

Long story short, it’s significantly easier to get an oscar as your wet pet!

I Can’t Pick… Can I Keep An Oscar & A Flowerhorn Together?

Probably not. I can only speak generally, especially where cichlids are concerned. This is because every single cichlid has its own personality. It’s not common, but you might find a really chill flowerhorn and a really chill oscar and they might be a match made in heaven. I’m sure there are some fishkeepers out there right now making it happen!

However, going back to speaking generally: it’s a bad idea. The flowerhorn is a hybrid composed of several Central American species, whereas the oscar is a South American cichlid. Amazonian cichlids, like the oscar, are generally less aggressive than their Central American cousins. As such, there’s a good chance a flowerhorn would really bully an oscar, preventing it from eating and even injuring it.

If you do decide to try your luck mixing them, be sure to read through this article on how to manage cichlid aggression.

Are There Any Other Good Wet Pets?

Gee, I’m glad you asked. Because, yes, there are lots of other good wet pets.

The obvious choice would be other medium to large cichlids. Because lots of them are going to just as personable as an oscar or a flowerhorn. One of my all time favorites is the midas cichlid. If you’re looking for a good example of a midas cichlid, check out Brian’s Fish Tanks on YouTube – he has a great male midas called Cheeto.

Other good cichlids that make great wet pets are the green terror, the jaguar, the black nasty cichlid, the dovii, and the umbee cichlid.

With the exception of the green terror though, all of these species grow larger than oscars or flowerhorns and will need bigger tanks. Always do your research before making a purchase.

There are lots of freshwater pufferfish that make great wet pets. But, for me, the king of them all is the mbu puffer–a species made famous by “Murphy” the star of the Aquarium Co-Op channel (sorry Cory, sorry Jimmy).

Again, be aware, this is an extra large fish—so, I repeat, always do your research!

What Types Of Oscars Are There Anyway?