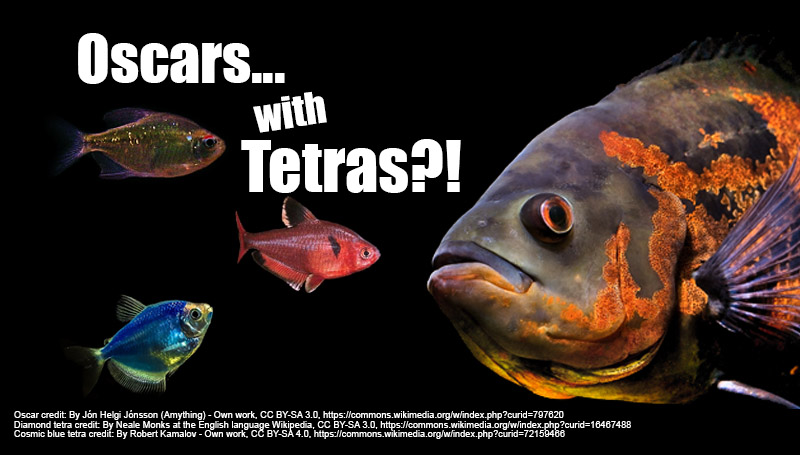 Wondering if you can keep oscars with tetras? Well, let’s be clear about it: it’s a bad idea. But, let’s go a little deeper into the topic so we can understand what makes tetras such bad tank mates for an oscar cichlid.

Oscars Get Too Big To Be Housed With Tetras

Make no bones about it: tetras are not good tank mates for oscar fish.

First of all, oscars are predatory fish. It’s true that in the wild, their diet is predominantly invertebrates, but they won’t turn their nose up at small fish. So, tiny tetras and gaping-mouthed oscars don’t mix. Oscars will use their large, hungry maws to devour tetras in a snap.

When an oscar is fully grown, it should be able to swallow most tetras whole. However, a juvenile oscar might not find it as easy. Oscars are famous for eating things that only just fit in their mouths. This can be problematic when an oscar tries to swallow one of its tank mates. This is especially so if the oscar tries to eat the other fish tail first, because this means the fin rays point backwards and can become lodged in the oscar’s mouth. This means trouble for both predator and prey. In such a scenario, both the tetra and the oscar could be at risk of dying.

But, For A Short Time You Could Keep A Baby Oscar With Large Tetras

It’s been made clear, oscars are not good tank mates for tetras. But, there might be a small window of opportunity where—temporarily, at least—very young oscars might be kept with some of the larger species of tetras. For example, the Buenos Aires tetra grows as large as 7.5 cm (3 inches). Also, Congo tetras grow a little larger than that.

However, be warned, oscars are extremely fast growing fish. Before you know it, your baby oscar will be big enough to gobble up even the largest tetra species.

Tetras include many different species, and each type of tetra will have its own requirements. However, generally speaking tetras are tropical fish and will have similar temperature requirements to oscars.

Sometimes the importance of pH and hardness is overstated. While wild caught fish typically do need to have their native water chemistry emulated, farm raised fish tend to be much more forgiving. This is because over generations of captive breeding, fish become more tolerant of typical tap water parameters.

So, considering most tetras are mass produced on ornamental fish farms rather than being wild caught, they should be tolerant of your tap water. Oscars, too, are almost certainly farm-raised fish and will be equally tolerant of a broad range of water parameters.

But, tetras and oscars are fish that originate from softer more acidic waters. So, ultimately, tetras and oscars—are compatible in terms of water chemistry even though their size difference makes them a no go.

Should you encounter any wild caught oscars or tetras then, of course, their water chemistry would require attention. It can be that some tetras are wild caught, for example, cardinal tetras are sometimes wild caught and sometimes farm raised. As such, it is important to talk to your retailer about the origin of the fish. However, bear in mind that cardinal tetras—as much as any tetra—would be a poor tank mate for an oscar. Cardinal tetras would eventually be eaten by an oscar.

In the wild, most tetra species are omnivores. This means they will consume things like tiny invertebrates, along with plant matter and algae. Oscars, similarly, prey on invertebrates. However, the kind of inverts that oscars eat are typically much larger.

Tetras are so incredibly colorful, it’s understandable that anybody would want to keep them. But, they make unsuitable tank mates for your oscar. As such, alternatives must be considered. Sadly, larger schooling fish generally don’t match the intensity of color that tetras offer. But, it’s important to remember that an oscar cichlid makes for an excellent “centerpiece” fish. So, if the schooling fish housed with the oscar are a little on the duller side, then that’s okay. In fact, silvery fish act as excellent accents to their more colorful oscar tank mate.

The below list is compromised of larger schooling fish.

Oscars and tetras, to put it bluntly, do not make good tank mates at all. Yes, their water requirements might be the same, but their size difference will be disastrous for the tiny tetras. Consider larger schooling fish like tinfoil barbs, silver dollars, or bala sharks.