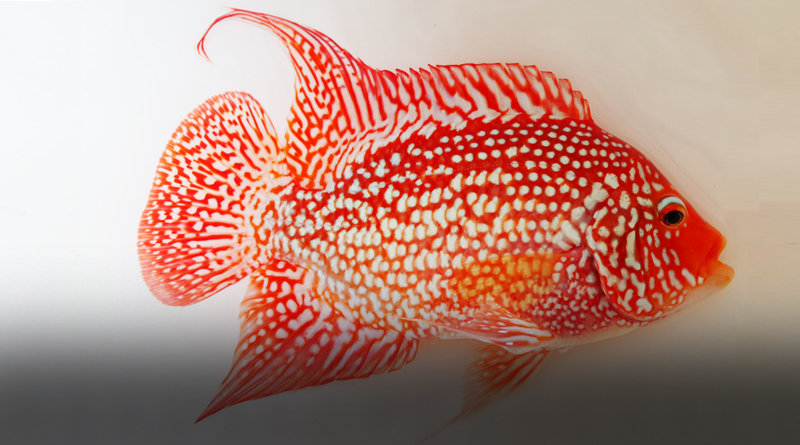 *Pictured fish bred by “Goal Red Ruby” – if you want an excellent quality super red Texas cichlid check him out on Facebook.

Red Texas Cichlids – What Are They?

A red Texas cichlid is a hybrid fish. Ideally, the fish should have a genuine, scarlet red coloration. However, the majority of red Texas cichlids are closer to orange than red. Nevertheless, red is the goal. In addition to being red, the fish must also have “pearls” spread across as much of the body and fins as possible. Pearls are small white spots.

So, Mixing Which Two Species Will Create a Red Texas Cichlid?

The answer to that is a little nebulous.

Typical red Texas cichlids are actually more than just two species mixed, because one of the parents itself is already a hybrid. The red Texas cichlid is (usually) comprised of fish from the following genera:

Urgh, That Sounds Complicated, Where Should I Start?

It’s not as complicated as it sounds because a lot of the groundwork has already been done by previous breeders. Your challenge for breeding red Texas cichlids can be distilled to the same challenge as breeding any cichlid, i.e. finding a pair of fish that are happy, healthy, fertile, and then encouraging them to bond.

If you’ve ever kept a pair of cichlids before, you probably already know how readily cichlids will pair up and breed. It’s a piece of cake! Bear that in mind whenever you feel overwhelmed by the idea of breeding hybrid cichlids.

You might be wondering, if it’s so easy, why are quality super red Texas cichlids fairly rare and very expensive? Keep reading, and the answers to those questions will be illuminated.

So, Again, Where Should I Start?

You should start with parent selection. Your choice might seem a little broad since the red Texas cichlid is more about its appearance than its composition. This is because you can get to the destination of a bright red fish covered in pearls via a number of different routes, i.e. by using different species from the genera mentioned above.

Ladies first, by that I mean, let’s pick out a female first and foremost.

This is where you take your first major shortcut. You do this by picking a female blood parrot, king kong parrot, or red mammon. The reason for this is that these fish have already been bred for (ideally) bright red color. They will provide the red for your offspring.

Well, can I use a male blood parrot instead and go with a female herichthys instead? The quick answer is: no, absolutely not. The long answer is: maybe, sure, if you like wasting time and money looking for a proverbial needle in a haystack. To clarify, male blood parrots, and male red Texas for that matters, are almost always infertile.

Finding a fertile male fish to breed with your egg laying blood parrot can be as easy or as difficult as you like.

If you want to make it difficult on yourself you can go ahead and spend a lot of time and money seeking out the Holy Grail, a fertile male red Texas cichlid.

Or, alternatively, you can cut yourself a break and use a fish that nature has provided for you. The good thing about naturally occurring species of fish is that you won’t have any fertility issues with them.

You should use a male carpintis cichlid (herichthys carpintis) or a male green Texas cichlid (herichthys cyanoguttatus). Which you use really depends on your preference, the carptinis—depending on which variation it is—has a “worm pearl” style where the spotting pattern curls around on the body. Whereas the cyanoguttatus has smaller, more numerous spots across the body.

What is a Thai GT and Should I Use One?

A Thai GT (Green Texas) is a green Texas cichlid (herichthys cyanoguttatus) that has been selectively bred by Thai breeders for their preferred traits.

Selective breeding (i.e. breeding for preferred traits) means a Thai GT will already have desirable traits. They tend to have the deeper, chunkier body type that breeders prefer. They also have been selectively bred to generally have more pearls than their wild type counterparts.

If you’re not familiar with the difference between selective breeding and hybridizing I have an article covering it here.

*Note: I have been told that Thai GT might contain a mix of blood from both herichthys cyanoguttatus and herichthys carpintis.

Okay, so it’s a no-brainer, I recommend using a Thai GT as your male starting point if you’re able to get hold of one. You should do this because, as with using a blood parrot as your female, it gives you a head start on reaching your final destination.

If you’ve kept and bred any Central American cichlids before you’ll know that they can be a nasty bunch. Males and females can easily do damage to each other, especially when breeding and their increased aggression can be misdirected at each other.

I have an article on managing cichlid aggression—you can read it here. That piece goes into detail about how to manage cichlids and their terrible tempers.

But, for the purposes of this article it’s worth covering quickly.

You want to protect your male and your female from each other if they are your breeding stock. Finding two parents that bond well and produce attractive offspring is a big part of the challenge. Therefore, it would be a terrible setback to lose one of your breeding fish to conspecific aggression.

You can protect a pair from each other by installing a divider in their tank. People typically use light diffuser, often referred to as egg crate. This has the benefit of being able to be cut to size to fit your tank. It also allows the fish to see each other through the gaps in the divider, thereby protecting their pair bond.

Culling of fry can be a contentious issue. I’m sure of none among us would think twice about culling sick or deformed fry.

However, when it comes to breeding red Texas cichlids, you will be culling healthy fish. And lots of them.

When you mix a green Texas cichlid with a blood red parrot only a very, very small percentage of the fry will show desirable traits. The rest of the clutch will be “ugly” and plain fish that you won’t be able to sell. Therefore, you will need to cull them.

Which Fry Should I Cull

Once your fish have spawned, the eggs have turned to wrigglers, and the wrigglers have grown into free swimming fish, you’ll start to notice a few fish that really stand out.

You will notice that a small number of your fry are showing signs of having the pearls their father had. These are your keepers, you should separate them for growing on, and sadly, the rest should be culled. You might wonder if you can sell rather than cull the plain fry. I would advise against it, as pearls will not develop later in life. Those fish will almost certainly never bloom into attractive fish.

My Juveniles Have Pearls, But Haven’t Turned Red or Orange Yet. Should I Cull Them?

No. Those fish have value as they may “fade” to orange or red later in life. You can sell those fish, but you must be clear when selling them that they are “unfaded” fish and there is no guarantee from you, the breeder, that they will ever fade. They might. But, you can’t be sure of that.

Some of your juveniles will be “early faders”. That means that they will begin to turn orange or red very early in their life. If you’re breeding for a profit, that’s where your profit is. The sooner you can spot faders, the better.

You can then begin the grooming process. This involves practices like fin splitting to increase the breath of the fins. It also encompasses feeding a good, color-enhancing diet. Some breeders will also encourage aggression in their males by introducing mirrors in the tank. This encourages the male’s nuchal hump (or kok) to develop. However, this is a practice more common in flowerhorns than red Texas cichlids.

Long story short: breed a green Texas male with a female blood red parrot. Pick out the best of the fry, i.e. the ones with pearls, cull the rest. Rinse and repeat. It’s that simple!

How To Tell A “Good” Red Texas From A “Bad” One

Click here to check out my article on what are desirable traits in a red Texas cichlid. It covers body shape, fin size and shape, coloration, etc. If you’re interested in red Texas cichlids, I recommend you give it a read. Click here!

Where Can I get One!?

So, I recommend getting in touch with somebody who sources their fish directly from the breeders and can get hold of top grade red Texas cichlids. Therefore, if you’re in the US and want a good red Texas, then I suggest contacting “Colorbeige“. He regularly has good fish in stock.

Other Info To Check Out

If you want to learn more about red Texas cichlids then check out some of the following resources.