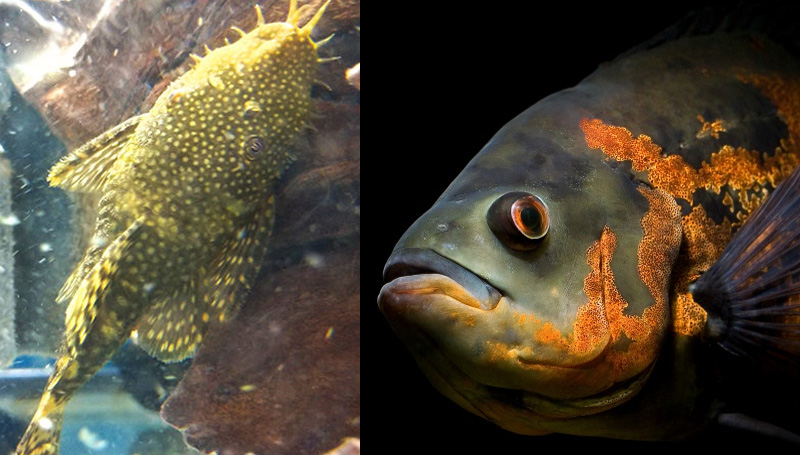 So, in this article I want to sucker you into the topic (pun intended) and explain when and why plecos are sometimes good tank mates for oscars, and why they might not be at other times.

Size Matters When It Comes To Keeping Oscars & Plecos Together

And honestly, size is the only thing that matters when thinking about housing oscars and plecos together. This is because oscars will eat other fish that fit in their mouth, and I mean barely fit! Typically, this isn’t too big of a problem for the oscar. Most of the time, the eaten fish will go down and be digested without issue.

However, I’m not advocating for giving your oscar feeder fish intentionally. Open this article up in another tab and check it out if you want to know more about the problems associated with giving feeder fish.

It’s Not Easy To Eat Plecos!

Plecos are catfish, and catfish have evolved a defense mechanism to deter other fish from eating them. Their fins often have spines on them, and those spines get caught in any fish’s mouth that tries to eat them. If you’ve ever tried to net a catfish in your aquarium you might have noticed the little bugger sticking to the net for some reason? Well, that’s because of its spines!

But, plecos have overtaken many of their fellow catfish⁠—they’ve pushed evolution a step further. In addition to fin rays that can stick into predators, they’ve also evolved thick, tough, plate-like armor across most of their bodies! This makes them an even tougher meal to cope with.

Plecos are even tough for us humans to eat. In the Amazon the common pleco is fished and eaten, but the only way fisherman can get at the flesh is to go through the soft belly of the fish. The armored body is too much hassle to go at.

But Aren’t Plecos Too Big To Fit In An Oscar’s Mouth?

In the past, only the common pleco (which grows very large) was readily available in the hobby. This is why we, aquarium hobbyists, often think of plecos as “big”. And that simply is not a broad truth.

Rather, plecos (or more accurately, the loricariids) are a family of catfish comprised of many, many species! And each species grows to a different size. Lots of pleco species remain dangerously small to be kept with oscars.

Okay, So I Can Keep Big Pleco Species With My Oscar?

Yes, you can pair a pleco with your oscar as long as the pleco is definitely too big to fit in the oscar’s mouth.

This, though, comes with a but! And that but is “growth rate”. Oscars grow fast, and a pleco might struggle to keep up with the oscar’s growth rate. So, therefore, you might pick up a baby oscar and a baby common pleco, but before long the oscar might be outpacing the pleco in size.

So, the solution is to simply buy a larger pleco if possible and pair that with a young oscar. It won’t be long before your oscar catches up with your pleco, don’t worry.

My Buddy Keeps A Pleco With His Oscar Without Problems

This is a very good point: most of the time keeping oscars and plecos together will be fine. Usually nothing will come of it.

However, if you spend any time in Facebook fishkeeping groups, you might have noticed this issue cropping up. Fishkeepers will post that their oscar has tried to eat their pleco. They will explain that, sadly, both of them are dying because the pleco is lodged in the oscar’s mouth.

And when this happens, you can be damned if you do and damned if you don’t. Because if you try to pull the pleco from the oscar’s mouth then the pleco’s backwards pointing fins can act like a harpoon and damage your oscar further. But, if you ignore the problem then both of your fish will probably die.

In conclusion, plecos can be good tank mates for oscars. The only thing you need to make sure of is that the pleco cannot fit in the oscar’s mouth. Also, be aware, if you purchase juvenile fish, your oscar will grow faster than your pleco.

But, as long as you make sure your oscar cannot eat your pleco, then you’ll be fine. It’s as simple as that.