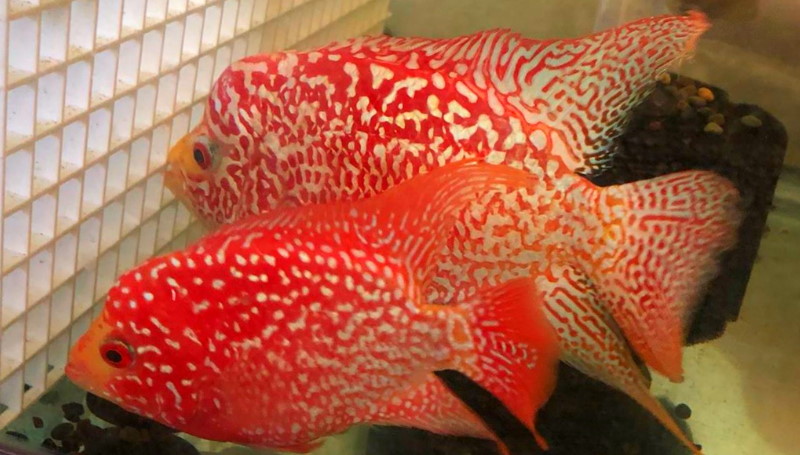 The “fireman’s dream” is a type of flowerhorn cichlid created by legendary Thai breeder Wuddy!

Flowerhorns are hybrid cichlids, they are created by mixing several different species of Central American cichlids. The trimac cichlid is thought to be the base used for flowerhorn strains. You can see evidence of this in the typical red eye of the flowerhorn and also the “flower line”. Although, the flower line isn’t present in all strains.

In addition, other species thought to contribute to flowerhorns include midas cichlids, red devils, carpintis, and green Texas cichlids. “Golden base” flowerhorns display the yellow/orange/red base from their midas lineage. Whereas, flowerhorns with “pearls” (light colored spots) probably have Texas cichlid lineage and that is where they get those pearls from!

Why Can’t We Be Sure What Species Are In A Flowerhorn?

You’ll notice in the previous section I don’t sound certain about the facts–specifically, I use “probably” and “thought to be”.

Well, this is for a few reasons.

Firstly, it can be difficult to know what has gone into the creation of a particular flowerhorn because they are so heavily hybridized. Secondly, flowerhorn breeders often make their living off selling their fish—so, as you can imagine, they can be protective of exactly how they breed their fish.

What Makes The Fireman’s Dream So Special?

In addition, they tend to display an almost milky white pattern of pearling. Furthermore, the pearl patterns can curl into and around each other, which presents—to me at least—a beautiful aesthetic.

If I was to speculate, I would imagine the “worm pearl” pattern might have come from the use of carpintis blood in the fish.

Lastly, where the red doesn’t cover the body, the fireman’s dream has a delightful underlying custard-colored yellow.

Well, actually, this is another thing that makes the fireman’s dream so incredible! Surprisingly, the males are typically fertile!!!

Anybody who’s kept red Texax cichlids (another hybrid variety) will know that a hybrid where the male is typically fertile is quite rare.

How To Get A Fireman’s Dream Flowerhorn In The USA

Wuddy created the fireman’s dream and he is still the best place to get them. So, you’ll need to find a US seller who gets the fish imported from Thailand. Therefore, I’ve connected with Instagram user “Colorbeige” – he works directly with Wuddy to get the best fireman’s dream flowerhorns into the USA and into your tanks! So, go ahead, check him out on Insta!

Recommended Food To Bring Out The Red In Your Flowerhorn