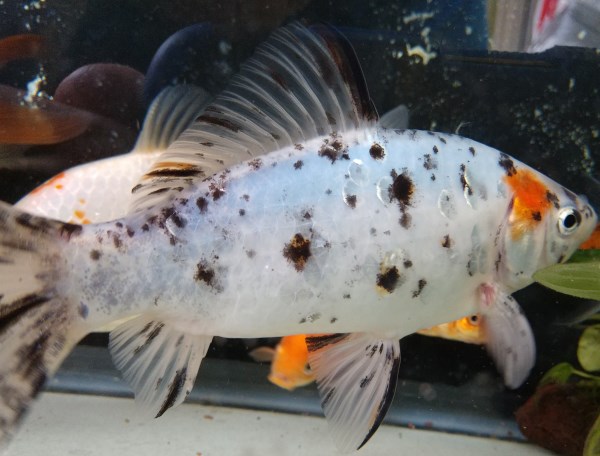 Wild fish can be pulled from any body of water in the world, and we can be certain its body is suitable for purpose.

Can we say the same at our local fish stores? And, more importantly, how do we feel about the modified bodies of our ornamental fish?

We have taken wild fish, starting with the goldfish, and modified their bodies to create pleasurable aesthetics.  We began with selective breeding thousands of years ago. And now, in the 21st Century, we’re modifying genes in a laboratory.

Have We Gone Too Far?

Before I get into it, this article isn’t a fist-waving exercise in virtue signaling.  I’m not asking you to euthanize your favorite telescope eye goldfish.  We don’t exist in a vacuum, so our moral compasses are, naturally, influenced by the discourse.  Ultimately though, I believe fishkeepers have to make their own decisions on what kind of fish they keep.

Selective breeding is the oldest form of human intervention in the bodies of other species.  The practice of intentionally breeding goldfish with more colorful scales with each other to produce a consistent line of brightly colored fish first began in the Jin dynasty (265–420).

Yet, there is an example of a fish where the color of scales is a matter of life and death.  I’m not talking about bright colors attracting predators in the wild either.

A clutch of electric blue Jack Dempsey cichlids can expect a high rate of fry mortality.  Breeders suggest fry of this particular strain are just “weak”; resulting in only a small number of fry surving into adulthood.

Beyond color modification, selective breeding has also been used to favor body deformities.

The short body mutation is a common one.

With a curved spine and a considerably reduced abdomen, side effects are inevitable.  It’s well known that fancy goldfish with squished, egg shaped bodies have a shorter lifespan than their single tailed counterparts.

Think of bubble eyes; those sacks can and do burst.  Telescope eyes are so cool looking, aren’t they?  But, bear in mind, those protruding eyes can be knocked clean off easier than you might think.  The bubbly growth on ranchus, lionheads and orandas can grow so large that it covers the eyes. As a result, the excessive growth must be trimmed with a blade.  These mutations make the twin tails of fancy goldfish seem quite tame, but even those inhibit ease of motion.

Swim bladder issues deserve a mention.  Who amongst us hasn’t seen an oranda floating, belly up, at the top of an aquarium?

Culling is an unavoidable part of breeding fish.  You’ll almost always have some unviable fry in a clutch.  Fish with severe health issues from birth are, without reservation on my part, best euthanized as humanely as possible.

However, when it comes to selective breeding for a preferred trait, healthy fish without the favored aesthetic are typically culled.

Mutilation; it sounds reprehensible, doesn’t it?

Unfortunately, some fishkeepers still defend piscine cosmetic surgery with the old fallacy that fish don’t feel pain.  They certainly do, and as aquarium hobbyists we must all know this on some level.  We’ve seen our fish flee from their tank mates after being nipped.

The aforementioned evidence is enough for me to believe our fish deserve the same kindness as our our mammalian pets.

So, what do the scientists say? Do fish feel pain?

After studying the brains of injured fish, scientists discovered they show signs of experiencing the sensation of pain.

Breeders noticed that when their goldfish lost a scale, the scale would grow back white.  As a result, it wasn’t long before breeders were removing scales intentionally; the aim was to create the perfect red and white pattern.  For example, the jikin variety’s color distribution is of the utmost importance.

Next on the agenda, and under the umbrella of color preferences, is dying.

As a kid, I remember being at my local fish store and being enchanted by the colored Indian glass fish.  Naive as I was, I had no idea the fish wasn’t “natural”.  Had I not just spent my pocket money on a couple of dojo loaches the week before, then I might have accidentally walked home with that dyed fish.

There are two prevalent methods to dye an ornamental fish.

Colored dye direct injection into flesh via syringe is one method.  Unfortunately for the fish, this technique usually requires multiple injections to achieve the desired color vibrancy.

Equally gruesome, is the the dipping method.  Before the fish can be dipped in the colored dye, it must first be stripped of its protective slime coat.  This is achieved by soaking the fish in a caustic solution.

As you can imagine, injecting and dipping result in high mortality rates.

When heart shaped parrot cichlids first arrived on the market, fishkeepers were unsure how they were created; i.e. had breeders happened on a tailless mutation, or were they simply cutting the caudal fin off?

Without numbers to confirm, I can only speculate the mortality rate for this practice.  Nevertheless, fish do feel pain, and as such this practice cannot be condoned.  Regardless, I feel as though I’m not alone in finding the final aesthetic achieved by the mutilation unappealing.

Using Mutilation To Protect Fish From Each Other

Few of us would condone any sort of amputation of a fish’s body.  Yet, there is one example that comes to mind that might just enter a moral gray area: lip removal.

Not many fishkeepers will have come across this practice; it is restricted to breeders of very aggressive Central American cichlids and their derivative hybrids.

Breeders sometimes remove a portion of a fish’s mouth to prevent it from killing its breeding partner.  Typically, it is the males that receiving this body modification.

Do I condone lip removal?  I don’t, I think breeders can use a combination of tank dividers, hiding spots, and vigilant observation to avoid accidents between their cichlids.  However, I find it difficult at times to pass judgment. Reason being, they are expert breeders and may have a perspective I’m not able to imagine.

Check out my article on “Managing Cichlid Aggression” here.

Logic being that when the fins heal, they will do so with a little extra fin tissue between the fin rays, thereby creating larger, flared finnage.

While I would not groom fish in this manner, breeders inform me that the very edge of fish fins can be likened to fingernails.  We all know that trimming those is painless, unless of course we trim too close to the skin.  I imagine the same applies for these fish, if the splitting goes too deep, the fish feels pain.

We’re talking about GloFish; these are a patented and trademarked brand of genetically engineered fish.

Like many fishkeepers, the first time I saw unnaturally colored zebra danios I thought the worst: dying.  I knew that selective breeding could only do so much. Moreover, I knew it couldn’t be used to produce unnaturally fluorescent colors.

In the opening of this article I made the contention that changing the color of a fish was a harmless thing to do, so how can I rail against genetically modified fish whose only difference to their wild counterparts is the color of their skin? The answer is, I cannot.

However, melancholy creeps as I age and watch the future of my beloved hobby change.  For thousands of years, devoted breeders have painstakingly sculpted what nature gave them to gradually and skillfully create domestic strains of fish.

The future, perhaps, is one where the boundaries are broken and traditional breeders are rendered redundant under the weight of more and more exotic laboratory creations.

While I don’t dare pass judgment on my fellow fishkeepers, there are some things I simply won’t do.

I could never put a fish through the pain of a blade cutting into its flesh.  Yet, I’m not outraged when breeders I respect blur the lines with fin splitting.

I wouldn’t like to keep a bubble eye goldfish, its everyday struggle to move around inevitably wear on my soul.  Yet, I respect and admire many fancy goldfish keepers.  In fact, I can’t help but marvel at world class orandas and champion telescope eyes.  I think they are beautiful.

My concerns for the final destination of genetic modification come more out of a selfish desire to keep the hobby how I like it; I’m getting older and I’m a certainly an institutionalized fishkeeper.

So, do what you will fishkeepers.  Where your moral compass pulls is entirely up to you.  I won’t judge you (well, for most things–tail removers be warned).