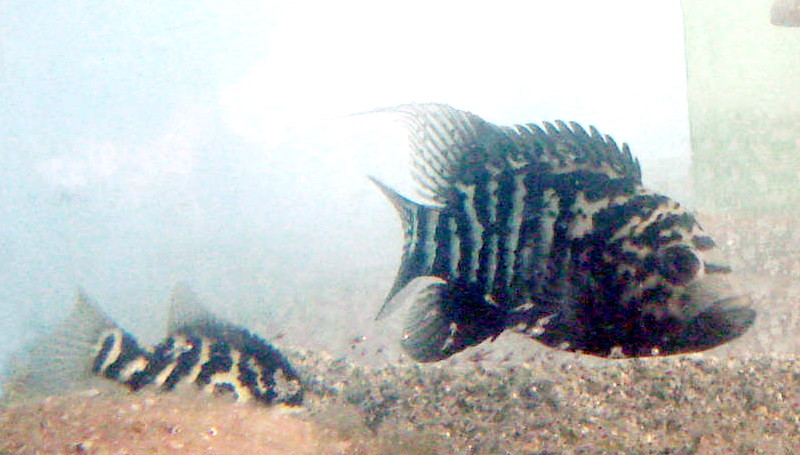 Nandopsis tetracanthus, the Cuban cichlid, is visually arresting.  Its pointed snout is pugnacious; a solid match for any of its rugged, mainland cousins.  Couple that ferocious front end with the striking contrast of its light and dark coloration and you have a fish whose first impression is like a punch in the nose.

But looks aren’t everything, the Cuban cichlid has more to its mystique than simple looks.  For US-based fishkeepers (like me), Cuban cichlids have, until recently, been hard to come by (due to well known political issues).

For those reasons, and more, I utterly adore this fish.

This fish is unremarkable in its requirements, and in-keeping with its fellow Central American cichlids it is a fairly hardy fish.  Tank raised fish will be more tolerant of a range of pH values.

While captive bred fish can deal with a wider pH range, its still best to keep it in water between 7 and 8.  If your tap water is outside of these ranges it doesn’t mean you shouldn’t try to keep this fish, give it a go and see how the fish reacts to your water.

Remember, when it comes to deliberately raising or lowering your pH, a lot of the time it’s a bad idea

The Nandopsis genus has another species in it, the closely related Haitian cichlid.  Or, as its better known, the black nasty cichlid.  It’s safe to say that aggression runs in the family.

This fish has a temperament comparable to other Central American cichlids and as such extra care must be taken when housing it with other fish.  For us fishkeepers, fewer things feel worse than waking up to a fish whose tank mate beat it to death.

This cichlid hardly differs from its close relatives, it is a substrate spawner where both parents care for the eggs and fry.  It breeds as eagerly as you might expect.

Due to their aggressive behavior, extra care is necessary when attempting to form pair bonds.  Begin with a divider between the fish. Once they have formed a bond, provide the female with hides big enough for her to fit in; but too small for the (ideally) larger male.

To prevent injury or death to either the male or female, observe the pair vigilantly.

(Check out my article on “Managing Cichlid Aggression” here)

Cuban cichlids will spawn on a smooth stone, a terracotta plate, or better yet, a smooth plate.  Smoother surfaces are preferred; they are less favorable for excessive bacteria growth.  This in turn leads to a higher hatch rate from the clutch.

Some breeders have followed the path laid out by the super red Texas cichlid and produced a super red Cuban cichlid.

This hybrid was produced using a female blood red parrot (itself a hybrid) and a male Cuban cichlid.

What Are You Feeding Your Fish?

Sure, it’s true, that for your fish to look awesome you need good genetics and solid water quality, but you cannot overlook the importance of a good diet for your fish.

Check out this article on some of my favorite fish foods and why I like them.