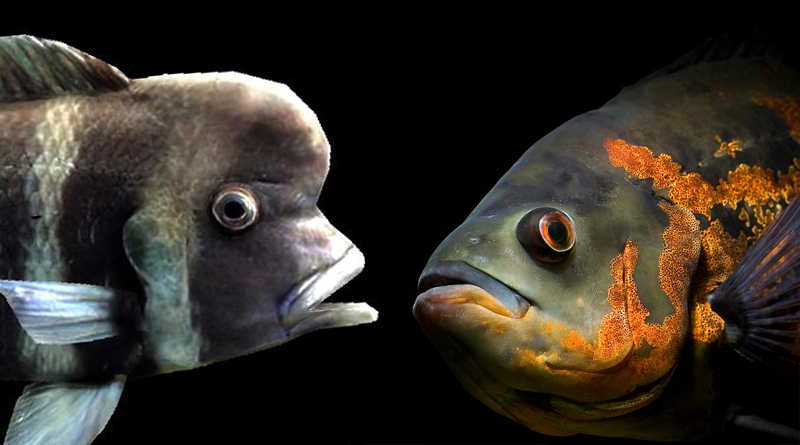 As fishkeepers some of us like to keep single species tanks, but most of us like to mix and match.  Why?  Because it’s cool to have different fish together, that’s why.

So that brings me to purpose of this article: mixing oscars with frontosas; is it a good idea?

I’ll break down some of the arguments for and against for you so that you can come to your own conclusion.

And for me that’s important, I want you to decide.  So many aquarists online will finger wag at you and tell you there is only one way to do things; i.e. their way, the “correct way”.  I don’t believe that.

A fully grown oscar and a fully grown frontosa are around the same size.  The oscar takes the prize with the potential to gain a few inches on a frontosa’s 14 inch maximum size.

So having read that you might think that size difference shouldn’t be too much of an issue when you keep oscars and frontosa together?

That’s true, but there is a caveat: growth rate.

If you pick up both your oscar and your frontosa as juveniles you will soon notice that the oscar first outgrows the frontosa and then will out feed it and eventually dominate it.

This means that if you do decide to pair these species up, then you should try to get a slightly bigger frontosa to account for its slow growth rate.  Alternatively you could try to pick up adult or sub-adult individuals who are more-or-less at their peak size.

But introducing large adult cichlids to each other is going to be more difficult than matching younger fish together.  But that’s a behavioral issue and I’ll cover that down the page.

In the wild these fish occur in very different environments.  That will be the main bone people will want to pick with you if you do keep these fish together.  If you post a video of them on YouTube for example, you will get several comments about this.

And the point isn’t one to be ignored.  The frontosa hails from a rocky rift lake whose water is hard and alkaline.  While the oscar is native to the Amazon rain forest; its home is soft, acidic and tea-colored water with a substrate of rotting leaves and branches.

I think you’ll agree, those environments couldn’t be more disparate.

So you might think that’s the end of the disucssion?  Not yet, bear with me.

Most of the fish you will purchase will be tank or farm raised fish, rather than wild caught.  You might be wondering what this has to do with their water chemistry preferences.  Well, domesticated fish do not have the same particular tastes for water chemistry.

A tank raised oscar will do just fine in a wide range of pH and KH values; they’ll almost certainly be fine in whatever water comes out of your tap (of course, with the chlorine removed).

The frontosa, likewise, if born and raised in captivity will not be demanding when it comes to water chemistry.

So Where Do You Want To Eat Tonight?

It’s not easy to pick which restaurant to eat at when you’re out with friends and family.  And usually your friends and family are the same species as you.  Imagine trying to agree where to eat with an entirely different species.

Well, while oscars and frontosa are different species, they are both carnivorous.

Having said that, they prefer different prey.

The frontosa is a piscivore through and through; this means it prefers to eat small fish.  In the wild, frontosas will primarily target members of the cyprichromis (Wikipedia) genus.

Oscars, meanwhile, prefer a wide variety of invertebrates—both those that land on the surface of the water and those living with the fish in the river itself.

While these fish might have different diets, don’t let that be a roadblock that prevents you from keeping them together.  You’ll most likely want to feed them a quality large cichlid pellet for a staple and then offer them variety in their diet in the form of treats each prefers.

A couple of my favourite foods for cichlids are Hikari Cichlid Gold (affiliate link) and Fluval’s awesome Bug Bites (affiliate link). Bug Bites are a great food for both oscars and frontosa because the formula includes both insect larvae and fish meal.

As an aside, I don’t advocate the use of feeder fish, I prefer the use of frozen foods in their place.

Cichlids, we’re talking about cichlids here—large ones at that.  So, as you can imagine temperaments must be considered.

Out of the two, I’d say the oscar is the more boisterous and aggressive species, with the frontosa being markedly more amiable.

Having said that, again, we’re talking about cichlids here.  So each individual fish will have its own personality.  When trying to match fish together I’d recommend careful observation of the fish when first introduced to spot any problem behavior.

If one fish is causing a lot of trouble, it might be worth considering re-homing that fish to save the other members of the tank from abuse or even death.

Bear in mind though, with cichlids, when you remove one problem fish, another one might take up the mantle of the dominant fish and be just as aggressive as the last one you replaced.

Managing temperaments, in my opinion, is the true challenge in keeping cichlids.

Should you keep fronts and oscars together?  Maybe.

The purists out there will tell you not to do it, they’ll tell you it’s an abomination.

My opinion is that it’s a challenge, but it has been done before and it is definitely possible.  You can do it if it’s your “hill to die on” so to speak.

Wonder What Type Of Oscar To Pair With Your Frontosa?

What Should You Feed Your Fish?