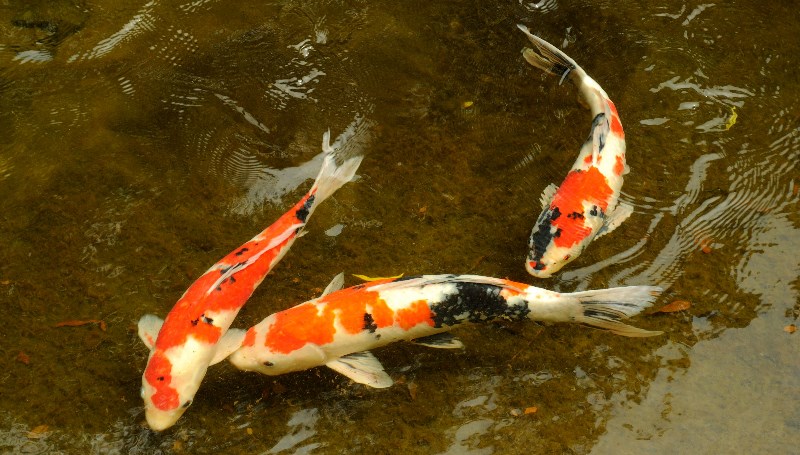 This is one of those classic questions newcomers to koi need to know the answer to.

To the layperson, sanke and showa might seem like the same variety of fish. They’re tri-colored koi after all: white, red, and black! And don’t beat yourself up if you’re struggling to tell them apart, even the initiated can find defining the varieties difficult in borderline cases.

You’ll notice as you read this article that I use a lot of words like “usually” and “generally”. That’s because, while there are hard and fast rules, sometimes there are close cases where a particular koi might not seem like a typical showa or a typical sanke, but nonetheless, it is one or the other.

Sanke Is A White Fish And Showa Is A Black Fish!

So, generally a showa is going to have more black, versus a sanke, with much less black.

This element of the varieties isn’t necessarily an easy tool to help you identify a koi’s variety. This is because black—or sumi in Japanese—tends to “come up” (i.e. it develops) over time. A young showa might not look like a showa because it hasn’t gotten its full complement of sumi yet.

So, therefore, it’s not particularly useful to say that a showa will have more black than white, or red, because that’s not necessarily true.

Although, the converse is generally true, a sanke should have significantly more white than black. But, again, because of the issue of black color development in koi it’s challenging to use this as an identification tool for younger fish.

Showa And Sanke, A Practical Explanation

Okay, so far I haven’t exactly but the topic to bed. So, let’s get into some practical examples to help you gain the confidence you need to recognize the difference between sanke and showa koi.

Sumi In Sanke Vs. Showa, Simplified

Below The Lateral Line?

The lateral line in fish is a long row of sensor organs that run along the animal’s flank. It is visible on koi and looks like a long row of small divots.

Red is a little bit different; it can sometimes cross the lateral line in a sanke, but generally isn’t preferred to. Whereas, with a showa, the pattern has an overall “wrapping” quality that goes around the fish.

Conversely, black below the lateral line in a sanke is not common or desirable.

Black On The Head?

A good indicator is the color on the fish’s head!

A sanke only has two colors on the head: red and white. And the white should be predominant, because in a sanke it’s the base color and the beni (red) patches should begin on that white base.

Whereas, a showa stands out because typically it does have black on the head, and black is considered the base color. But, with showa, it’s more than that: there should also be red on the face.

Black On The Fins?

Sanke are usually going to have white fins, the same white found on their body. Having said that, if there are black stripes along the rays of the pectoral fins of a sanke, it isn’t the end of the world. In fact, it isn’t even really undesirable.

However, black on the fins of a showa is much more common. It even has a special word used to describe a patch of strong black pigment extending from the oint of the body and fin: motogoro!

Remember though, motogoro is not always present on a showa.

Scaleless (i.e. doitsu) varieties of both sanke and showa are available. I wrote an article on the origin of doitsu koi here.

Another scale type, gin rin, is also possible in show and sanke koi.

And I feel bad not referencing kohaku—the red and white koi.

Kohaku are the third member of the “big three” koi varieties. Kohaku, sanke, and showa are known as the “gosanke” varieties. I’ve written an article on the meaning behind the word “gosanke”. Check it out here.