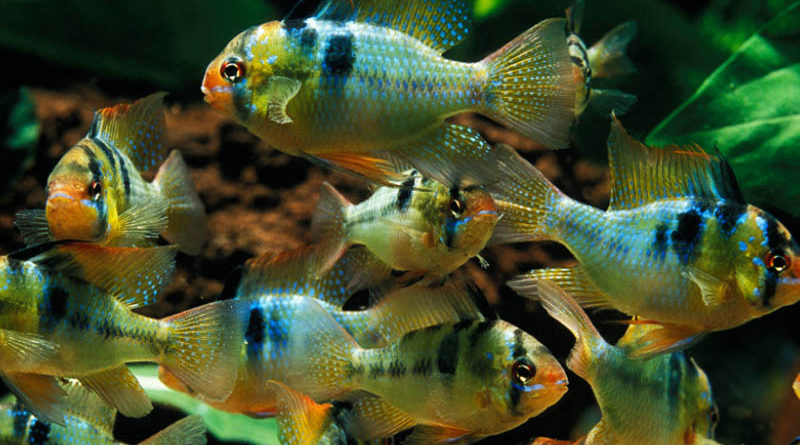 Here’s the honest truth: it’s probably not your fault that your ram is sick and/or died. In this article I want to cover why most people fail with German blue rams and how you can be successful and keep them healthy in the future.

My aim for this article is to go beyond simply listing ideal water parameters (pH, temp, etc). I’d like to get into some of the unpleasant realities of what goes on “behind the scenes” to produce German blue rams on an industrial scale.

First and foremost, it’s probably a good idea to get into the consistent health problems we encounter as aquarium hobbyists when we keep German blue ram dwarf cichlids.

The most common experience with them is that they simply “waste away”. Your ram cichlid’s abdomen might become sunken or it might have already been sunken when you bought it. Those bright colors you saw at the store will also start to fade, which is another indicator that your fish is deteriorating. Next, you might notice your fish hiding more and more, or becoming a victim of bullying by the healthier fish in the tank.

This condition has picked up the nickname “ram disease” in the hobby.

Some ornamental fish farms do a great job and raise healthy, robust, and colorful fish. However, when it comes to German blue rams there is definitely a pattern of poor quality fish being produced by a number of suppliers.

They do this because they want to drive excessive and premature development in the fish to make them more attractive to consumers, and they want to do it as fast as possible. Hence, dosing with both color and growth hormones.

Administering these hormones results in stressed and unhealthy fish that—for the time they’re in the fish store tanks—look great; but ultimately they will fade and slip into decline once you’ve parted with your hard currency.

You might be wondering why rams suffer from this more than other fish. Well, the truth is that other fish might well be treated with hormones but, for some reason, they don’t suffer the consequences as severely as rams do.

But, I can see exactly why fish farms want to “juice” their rams.

And then, of course, this initial treatment of the fish creates an irresistible vicious cycle (or circle, whatever you prefer).

In addition to the hormone treatments, we have to ask ourselves: how robust rams are in terms of genetics? Not very, is the answer.

Inbreeding in rams has resulted in very delicate fish susceptible to disease and parasites. Typically domestic fish are hardier than their wild counterparts, but with rams many breeders report their wild caught fish are healthier than their store bought stock.

The more the strain deviates from the wild form, the weaker it is inclined to be. As such, if you want healthy rams, it’s probably best to avoid the electric blue varieties, long finned varieties, and the balloon bodied varieties. These strains will almost certainly be more inclined to poor health.

Shipping In From Overseas

Okay, so, we have an inbred and hormone hammered fish.

Let’s ship it seven thousand miles from an Asian fish farm to a US pet store!!!

As you can imagine shipping an already weak fish half way around the world probably isn’t the best thing for its health.

Also to be considered is that most fish stores simply do not quarantine their new fish. They’ll often go directly from the shipping bag into a tank for sale. Meaning you, the unaware consumer, might be buying an inbred, hormone treated, German blue ram on the exact same day it arrived in the country.

No wonder the poor fish is dead in your tank in a matter of a week or two.

Don’t Beat Yourself Up About It

So, if you’ve read this far you probably understand that it’s not your fault your ram is sick, or worse, has already died. Therefore, it’s important not to be too hard on yourself. It almost certainly isn’t your fault if you haven’t succeeded in keeping German blue rams healthy.

How To Keep Your German Blue Rams Healthy

Alright, so far we’ve been able to establish exactly why German blue rams can seem like a very delicate and sickly fish.

Now it’s time to get into the details of exactly how to keep German blue rams, and how to keep them healthy, happy, and extremely colorful.

Without wanting to paint too grim of a picture, it can difficult to bring back sickly farm raised rams. But, if you have bought one already and you fear the worst, keep reading because these tips can at the very least give your fish the best chance of recovery.

Or maybe you’re thinking of buying some rams in the future and you need some advice? Well, read on, because here are some pro tips!

It’s Tempting, But Ignore Those Bright Colored Fish At Your Pet Store

For all the reasons mentioned above, you must use all your will power to resist the stunning German blue rams and electric blue rams at your pet store.

Don’t do it, don’t buy those fish.

Well, you might be able to buy them, but before you do you might need to have a chat with the employees about where exactly they source their rams. Sometimes local fish stores work directly with local breeders to obtain their fish.

If your LFS can confirm 100% that their rams are domestic born and raised by a local breeder and thus are not treated with hormones then you can go ahead and buy them. If, however, the store is reluctant to provide you with that information then go ahead and pass on those fish. They’re probably farm raised and might turn out to be on the weak side.

Buy From A Local Breeder

This, for me, is the key to locating and keeping healthy German blue ram cichlids! Aquarium societies are a great place to start. Do a quick search to find out if your local area has an aquarium society or club. If they do, you’re in luck. There’s a very good chance somebody in that group is breeding rams!

Locally bred fish are a great choice for several reasons. First of all, they’re likely being bred by a hobbyist with a passion for that particular fish. But, more important than that, is the fact the fish are being bred, born, and raised in (probably) the exact same tap water you have. Therefore, they’ll be perfectly adapted to your conditions right off the bat!

If you don’t have a local club or nobody in your local club is breeding German blue rams, don’t panic. You still have lots of other options for finding healthy ram cichlids. For example, sites like Aquabid.com allow fellow aquarists to sell the fish they’re breeding. You should be able to find a ram breeder there. If you’re new to Aquabid, just think of it as like eBay, but for fish!

I have a much more in depth article on how to find local breeders for all kinds of fish, check it out here.

No matter how much faith you have in the source of a fish, if possible, you should spend some time examining the fish. I appreciate that depending on the scenario—i.e. purchasing online—you might not be able to examine the fish in detail prior to purchase.

But, if you are able to look at the fish in real life before you buy, you should look for the following indicators of good health.

In my experience, when it comes to rams especially, a sunken belly is a sign of a fish that is unlikely to thrive for you. It could be that the fish was overly starved prior to and during transport. Typically, depriving fish of food before you ship them is a good idea because then they won’t poop in the bag, but if transit takes too long then it can have unfortunate consequences.

And that brings me nicely onto behavior to look for. After all, while fin clamping is a trait in the body you should look for, it is also something that combines with a broader set of behavioral indicators that let you know something is wrong with the fish.

The fish you choose should be bright in the tank, it should be moving around and engaging with other fish and its overall environment.

Rams can be a bit shy, so if the fish is hiding that might not in of itself be a significant indicator, but if you combine hiding behavior with other indicators then it can be something to be concerned about.

You’ll hear a lot of things repeatedly in the fishkeeping community. One of those things is, “I feed a good pellet/flake and then do frozen or live foods.”

Exactly what constitutes a good pellet or flake food is quite a complicated business.

When you look at the packaging of any fish food you’ll see percentages on their, and a lot of people focus on the protein percentage. And that’s fine, protein for a lot of fish is important and you’d rather have protein than filler ingredients like ash. However, what is the source of the protein? That’s something to take into consideration also.

So rather than go too deep into the rabbit hole, I’m just going to go ahead and endorse the food that I use and that I like. Other people might have a different experience, but for my rams they’ve always enjoyed Hikari’s Micro Pellets (affiliate link).

But, like almost every fish you’ve ever heard of, they really go nuts for bloodworms, black worms, brine shrimp. So, remember live and frozen foods will keep your rams in good condition too.

Rams like clean water. Rams. Like. Clean. Water. Sure, all your fish want their water to be low in nitrogen compounds (ammonia, nitrite, nitrate), but some fish really love clean water—discus are another one.

What does this mean for you? It means keep up with your water changes, and try to avoid overstocking. I’m not a fan of the stocking level “police”. I see stocking levels of an aquarium as something you can manage, and I have an article on it here. But, regardless, you’re looking to keep your nitrates low with your rams, so having a lot of fish in your tank is going to affect that—it’s a fact.

Don’t worry about pH. Unless your pH is in the crazy high (above 8) then you don’t have to be concerned. Your tap water is probably just fine for keeping rams.

You might see other sources quoting soft, acidic water for rams. And while that might be ideal, it is by no means necessary. Furthermore, it can actually be detrimental to chase the ideal pH with chemicals and additives as that can lead to a pH crash.

Just stick with the pH out of your tap, as at least that way it will be consistent. Fish love consistency.

This is the one thing that might be the key to succeeding with rams for you: water temperature. Prominent sources out there will recommend temperatures in the mid-high 70s (fahrenheit) and that is just plain wrong. Rams need the water to be warmer, the mid 80s is best, you could even go into the low 90s and have no issues. But, personally, I’ve done well with them between 86-88°F (30-31.1 °C).

So, in conclusion, I think the keys to success with German blue rams (mikrogeophagus ramirezi) are: 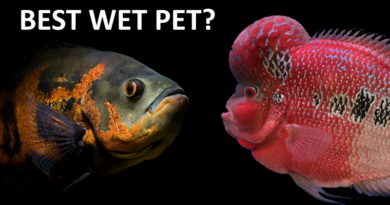 Oscar vs Flowerhorn – Which Is The Best “Wet Pet”? 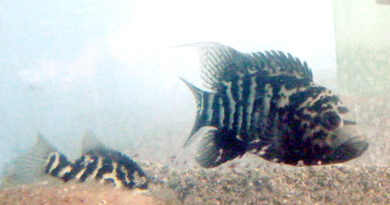 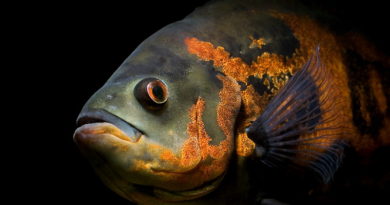 Oscar Laying On Its Side? What Does It Mean?