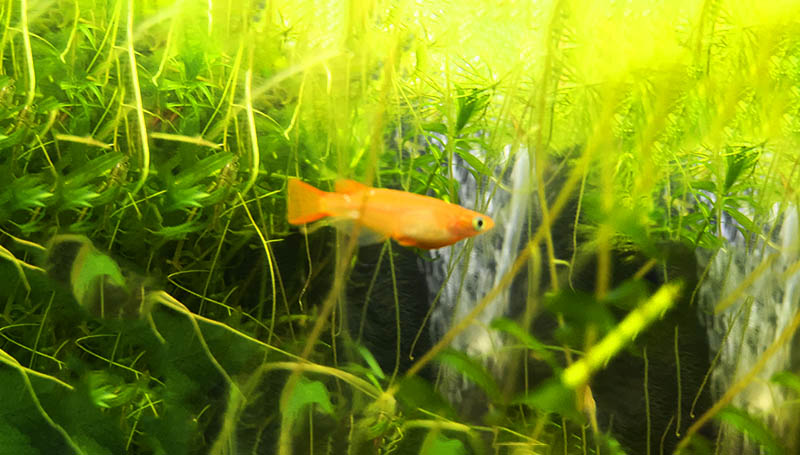 The Japanese rice fish (known as medaka in Japan) is, by any measure, an excellent aquarium fish—they’re small, hardy, come in a lot of different colors, and are unfussy eaters.

The reality is that, generally speaking, commercial fish foods are excellent these days—they have a great blend of ingredients and a solid balance of nutrients.

So, why not just feed, for example, Tetra Color Flakes exclusively?

Well, while that is a good food to feed and your Japanese rice fish will certainly thrive on it, it can deny you a rich experience. That is, when you research what fish eat, you can learn to better connect with your fish.

Forming a better connection with your fish, their diet, and ultimately, their behavior, starts with examining the fish’s experience in the wild.

It’s important to make a stark distinction between historically domesticated fish and recent additions to the hobby. The goldfish is the classic example: this fish has been kept by humans for so long that its wild origins have become quite murky. So, a goldfish will be must better adapted to eating in captivity than a new species recently discovered and put into our tanks.

So, where do rice fish fall on that scale? Well, Japanese rice fish are much closer to goldfish on that scale because they have been bred in captivity for generations. However, this doesn’t mean we should disregard the clues their wild counterparts can provide us.

What Do Japanese Rice Fish Eat In The Wild?

When you keep aquarium fish, and research their diets, you’ll start to notice that most species we keep seem to be listed as omnivores. Sure, there are specialist feeders that might focus on something—like plecos with biofilm or puffers with shelled crustaceans. But, most of the common aquarium fish we keep are omnivores.

Like many aquarium fish, Japanese rice fish are omnivores.

So, what does it mean to be an omnivore? Well, “omni” comes from Latin, and means “all”. So, it means you eat everything, whether that’s another animal or plant matter.

In the wild, Japanese rice fish are true opportunists. They’ll graze on biofilm, nibble on larger plants, and are vivacious micropredators—so, tiny invertebrates watch out!

Can We Recreate Their Natural Diet In Captivity?

It’s always going to be difficult to recreate a perfectly natural diet in the home aquarium.

This is because, in the wild, a fish has evolved to thrive in its biotope—it takes from and adds to its ecosystem. For example, in the wild, a Japanese rice fish might eat a particular sort of freshwater crustacean, but you won’t have access to it. However, feeding your Japanese rice fish daphnia (a commonly available live food) is an excellent option to get as close as possible to that natural experience.

So, consider adding live or frozen invertebrates to your Japanese rice fish’s diet. There are also options for dried foods containing invertebrate-based nutrition—Fluval’s “Bug Bites” are an excellent option.

Remember, Japanese rice fish are omnivorous, so adding some plant matter can help. Interestingly, while they are omnivores, I find that Japanese rice fish do not actively feed on live plants in the aquarium. However, I do find that they enjoy heavily-blanched broccoli. While broccoli is in no way a “natural” food for Japanese rice fish, it is a nutrient-packed vegetable and represents a solid option to add greenery to their diet.

It’s fun to give your fish live daphnia, frozen bloodworm, and blanched broccoli. However, in recent years, manufactured fish foods have gotten so good that it’s not as important to supplement diets.

This means that it’s perfectly acceptable to feed a quality flake or granule food to your Japanese rice fish most days. In fact, some ornamental fish farms feed prepared foods exclusively.

People like simple answers to questions like this—either Japanese rice fish do or don’t eat shrimp. However, the answer is, of course, more nuanced than this.

Truth be told, Japanese rice fish are micropredators—they enjoy eating tiny aquatic invertebrates. So, things like shrimplets fall right that category. As such, you can expect the Japanese rice fish in your aquarium to prey on freshly-hatched cherry shrimp.

However, adult cherry shrimp and other larger species of shrimp—e.g. Amano shrimp—are far too large for your Japanese rice fish to tackle.

But, even though Japanese rice fish will eat baby cherry shrimp, this doesn’t mean they will necessarily eat all of the cherry shrimp offspring in your tank. Instead, they will eat those that they can find. Therefore, if you provide a lot of hiding spots for the baby shrimp, then at least some of them will survive and grow too large for the Japanese rice fish to eat them.