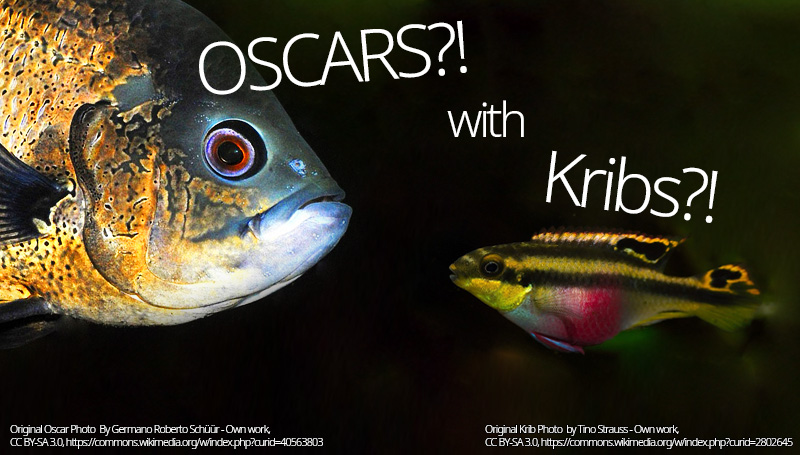 Thinking of keepings oscars and kribs together as tank mates? Well, think long and hard—keeping kribs with oscars isn’t exactly an easy proposition. Keep reading to find out why.

While there are many species in the genus, the “krib” you’ll most likely see for sale in pet and fish stores around the world is Pelvicachromis pulcher.

What Do Oscars And Kribs Have In Common?

So, oscars and kribs are both types of cichlid. Great! What else do they have in common?

Well, they both occur in soft, acidic rivers that run through tropical rain forest. Sure, they originate thousands and thousands of miles apart, but in essence, their environments are quite similar.

Additionally, both kribs and oscars are commonly available in the aquarium hobby. Having this in common is important because it means that both fish are well-adapted to life in captivity. This tends to be a fairly natural process over generations of captive breeding. Specifically, the fish that survive in captivity, and those that survive from subsequent spawnings, are better adjusted to life in aquariums.

Not a lot, honestly. While they are both cichlids, and they are from similar—if, distant—environments, they are not good tank mates.

The main reason is their significant difference in size. The common krib—Pelvicachromis pulcher—can reach as much as 5 inches (around 12cm). Although, in the home aquarium they are often smaller than that. Whereas, the oscar cichlid has been known to reach 18 inches (~45cm)! However, typically oscars reach around 12 inches (~30cm) in our aquariums. This significant size difference means an oscar will bully and will probably (eventually) devour a krib tank mate.

Water Chemistry: Does It Matter?

Does water chemistry matter when you’re keeping oscars with kribs? No, not really. For two reasons.

Firstly, both oscars and kribs occur in soft, acidic water. As such, if your goal is to recreate the water chemistry of their native rivers then there is no conflict. However, the vast majority of both kribs and oscars available in stores are certainly farm-raised. This means that they have been captive raised for generations. So, captive raised aquarium fish are generally well-adjusted to a broad range of water parameters.

Both oscars and kribs, being well-domesticated ornamental fish, will happily consume commercial fish foods. However, it is important to note that their diets in the wild are quite different. Oscars primarily dine on invertebrates. Whereas, kribs mostly consume diatoms, algae and plants in the wild. However, kribs do also include small invertebrates in their diet.

Oscars And Kribs: How Can I Make It Work?

It is not recommended to keep oscars and kribs together. However, when it comes to fishkeeping there are no hard and fast rules. Consensus may well be that X fish is incompatible with Y fish, we’ll often find a hobbyist somewhere who has found a way to make it work.

So, if you really wanted to make kribs and oscars work, how would you do it?

Well, first of all, I would probably only house a young (i.e. very small) oscar with kribs. But, even then, it’s important to remember that oscars display a phenomenal growth rate. It would only be a matter of weeks before a baby oscar was large enough to start causing problems for a krib.

Another way to try and force the partnership would be to create an intricate hardscape. This scape would have to include numerous small hidey-holes. Logic being that the kribs in the aquarium would be able to quickly retreat into spaces the oscar could not reach them. However, be warned, in the confines of an aquarium it would likely only be a matter of time before the oscar eventually caught a krib or two.

Sure, you might be able to make it work. But, it would be better to just grab another fish tank and keep the poor guys separately!